No. This was not the working title for “Polka Dots and Moonbeams.” That I know of.

The other day, the Porcupine, in explaining his own general lack of reticence, invoked Scripture thusly.

Today being Easter, I thought it might be interesting to take a look at the way that phrase has come down to us. Especially the last word. Also, there’s a nifty tie-in the “Wolf Hall” which kicks off tonight on PBS. We read it in the KJV as:

“Ye are the light of the world. A city that is set on an hill cannot be hid.  Neither do men light a candle, and put it under a bushel, but on a candlestick; and it giveth light unto all that are in the house.”  (Matthew 5:14-15)

Like many before him, the Porcupine has assumed that a bushel is a basket. But to a person in the age of “Wolf Hall” and the KJV  it would more likely be an 8-gallon bucket.  It makes more sense that way. A candle under a basket is a fire hazard, and the light would seep through. 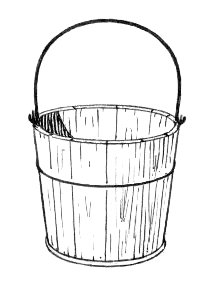 Now, who chose “bushel?” This is where it gets very interesting and all up in Wolf Hall. You have probably never heard of William Tyndale even though you use his jams  every day, especially if you are celebrating “Passover” right now or complaining that in this “moment in time,” Calipari is kind of a “scapegoat.” Check out the “impact on the English language” here.  It’s breathtaking.

Tyndale is a big deal in the world of “Wolf Hall.” Note this review.

[Thomas] More’s admirers have glossed over his crusade against Protestantism, which led to the torture and burning of men who distributed Tyndale’s English New Testament. Wolf Hall brings this back into the open, a reminder that religious steadfastness is not necessarily a virtue or flexibility the Mark of Evil.

So there you go.  If I end with “Godspell” will that wreck the mood? They rhyme “bushel” with “crucial.”