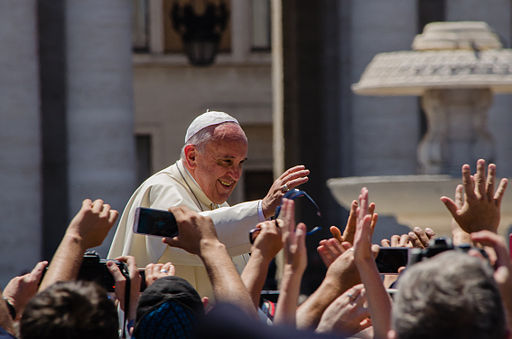 Note to Eizabeth Esty. It is a double mistake to say: “I am a deep person of faith.” First of all, I think you mean, “I am a person of deep faith.” Second of all, that is the kind of thing persons of genuine deep faith do not compelled to announce about themselves. Consider the exhortation of Jesus in Matthew 6:5.  When politicians start trotting their faith around like a show horse, asking them to explain what they mean in detail is not a gotcha question.

What’s more interesting is the way in which Pope Francis stands in explicit and implicit moral opposition to so many things that are wrong in the U.S. and with the U.S.  I am reminded of Lenny Bruce’s famous routine in which Jesus and Moses show up at St. Patrick’s Cathedral in New York.

Christ says to Moses, “My visit took me to Spanish Harlem where there were forty Puerto Ricans living in one room. What were they doing there when this man”—Lenny pointed to the Cardinal—”has a ring on worth $10,000?”

American bishops, get ready for some questions about how you live — and not just in terms of opulence. Do you live as though you took climate change seriously? Because Francis does.

All Americans should get ready. Francis is — in the best possible way — a Marxist. From the Times:

“I think what he criticizes in the U.S. is the absolute freedom and autonomy of the market,” said the Rev. Juan Carlos Scannone, a professor emeritus of philosophy at Colegio Máximo, a prominent Jesuit college near Buenos Aires. He taught the young Jorge Mario Bergoglio, who would become Francis, as a seminarian and became a friend. “We should admire the U.S.’s democracy and the well-being of its people, but what Bergoglio would criticize is the consumerism: that everything is geared toward consumerism.”

Francis has long been troubled by what some Argentines of his generation call “savage capitalism.” They see the United States as the home of mining companies and agribusinesses that chew up natural resources, as the military power that propped up dictators during the Cold War and as the neighbor that tries to close its border to migrants fleeing hunger and violence.

He has every right to ask us why we’re doing so little about climate change, why our ungenerous refugee policies are so clouded by xenophobia, why we tolerate a system in which our children are 11 times more like to die by guns than their counterparts in developed economies, why we have 5 percent of the world’s population and 25 percent of its prisoners, why we use our bail system to hold poor people in jail without trial, sometimes for years…well, let’s just say he may have a whole lot of righteous and rightful questions.

So all you A-Listers lining up your tickets, try to have a few answers.