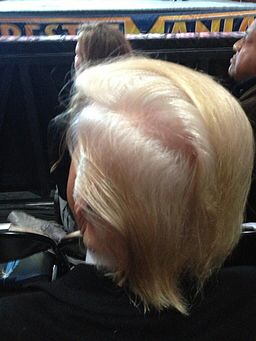 Supporters of the Democratic Party in Connecticut received an email this week, ostensibly from new party chairman Nick Balletto. Balletto has been a pleasant surprise so far, offering up gentlemanly words upon the resignation of his opposite number Jerry Labriola and moving swiftly and sensibly to change the name of the party’s annual dinner. That makes me doubt that he had much to do with this very stupid email

Donald Trump is the classiest, most luxurious Presidential candidate of all time (just ask him).

His brand has risen him to the top of the polls, and now Trump-brand Republican candidates are running for office across Connecticut to control our towns, cities, and communities.

I don’t know about you, but I don’t want guys like Donald Trump running my city.

Sign up before midnight TONIGHT to kick these ReTRUMPlicans to the curb in November.

Setting aside its garbled English, this communication makes no sense at all. Here is a list of contestable mayor’s races. Can you spot one where a Republican candidate who resembles Trump is running? Even though I can’t claim much knowledge of many of these towns, I doubt there are any “guys like Donald Trump” in play, and if there are, the Democrats should name them instead of misting everybody with their spray bottle of bogeymen.

I’m sure there was a national memo sent out: for the immediate future, tar your Republican rivals with the stickiness of Trump, whether it makes the slightest bit of sense or not. I do understand this is politics. I do understand that the Republicans, for their part, have spent seven years slinging around the notion that Barack Obama — a Democrat who has mostly been egregiously pro-business and heart-sinkingly in the thrall of Wall Street, capitalism and big banks — is a socialist.

So nobody ought to expect fair play from either side. How about plausibility? Obama is no socialist, and Roy Zartarian, the Republican candidate for mayor of Newington, is nothing like Donald Trump. Probably. I don’t really know, but I promise to watch him carefully for signs.

Mr. Balletto, you have an office full of bros and frat boys. If you do not keep a close watch on them, they will make you look like an idiot. Maybe even a “Trump-brand” idiot. Whatever that is.